In the PROFILES section: Eight ceramic artists from USA, Austria, Italy, Germany, UK, Spain. Coverage of EXHIBITIONS and EVENTS in UK, Czech Republic, Italy/Croatia, Australia, Germany, Italy, Denmark. In the section ARTIST JOURNAL, we present Liu,Xi and Naoki Nomura. And we also have interviews with artists IN STUDIO as well as listings of Dates, Courses, Seminars and Markets. 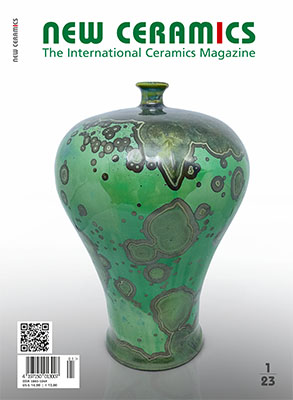 You are one of the absolutely outstanding artists on the ceramics scene. How did you start?
I come from a large, loud Detroit family that was not involved in any formal creativity. To my great fortune they were, and remain, fully supportive of my evolution as an artist and my career activities.
Drawing and painting had been the center of my earliest artistic actions. Only after numerous incidents of misbehavior in high school I was sent to a class called “Ceramics” that I was not at all familiar with and feared was some sort of punishment. I had never seen or touched clay before.
I was 16 at the time. With that initial exposure my path was set, and I have never looked back. As a graduate student at the Tyler School of Art of Temple University in Philadelphia I realized that a professional career might be possible. Soon thereafter successes, exhibitions and teaching opportunities came quickly and often. 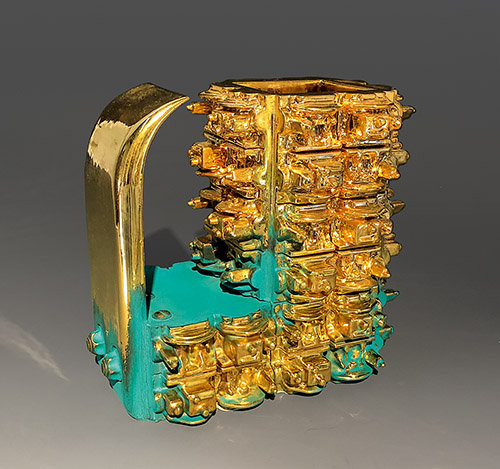 For the early Romantics in Friedrich Schlegel’s circle, the fragment was the preferred form of thought and expression. They regarded it as “mental yeast – fermenta cognitionis” for the reproduction of a complex reality. Karl Fulle’s driving force is the brittleness of the material, the unpredictability of what will emerge when you take it apart. Fragments are where he draws inspiration, fragility is the nature of the material. “As soon as you tear open a rotating form, an incredible dynamic is created,“ says the ceramist, pointing at a thrown form from which a piece has broken off. The form appears extremely fragile, dashed off at the moment of supreme perfection. The arc is inscribed in the shard, the throwing marks emphasize its inherent power. Musically, the broken ends curve into space and create a melody. Everything is in motion and it is precisely the incompleteness of the object that implies torsion. Fulle was not encouraged to work in this way by the early Romantics mentioned above. Rather it was the Asam brothers’ Baroque vocabulary, their dynamic lines, illusionism and ecstasy that inspired him to break new ground and free himself from conventional ideas through the fragment.
(Doris Weilandt) 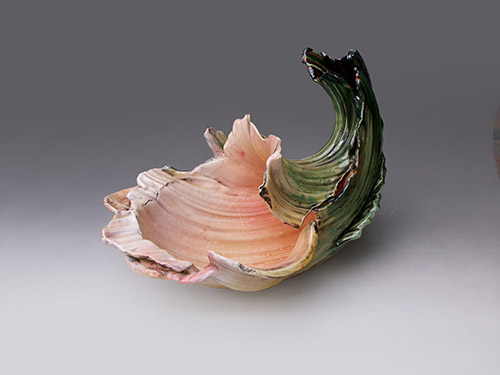 In the world of ceramics, the spotlight on crystal glazes comes and goes in waves.
What is it that fascinates you about these rather tricky glazes?
The kiln paints pictures – fantastic new ones in every firing!

Surface – form – the wondrous crystal formations? What is your top priority?
Form comes first. The glaze must harmonize with the form, subordinate itself to the form. (Just because the crystal formation works best on enema bulb-shaped vessels, this is by no means a reason to make such forms.) Since crystal glazes are mostly “loud” and dominant, this is a difficult endeavour.
Basically, it is important to prevent a “war” between glaze and form, which in my opinion works best with classic, severe, conservative shapes. 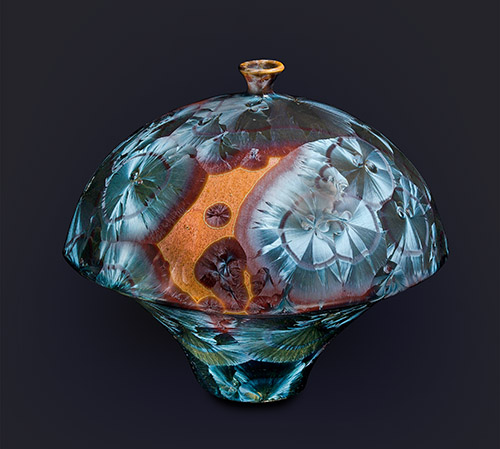 “I always knew I wanted to be an artist,” says Lyn Riccardo in her studio in Weiten, a district of Mettlach in southwestern Germany. Riccardo was born in New Jersey, USA, became acquainted with ceramics through a high school teacher and was inspired. It soon transpired that she had a talent for the material for in 1974 she was admitted to study at Alfred College of Ceramics in New York State. The course was comprehensive, not only subjects such as art history, architecture or chemistry were taught, students had to familiarise themselves with all the materials, ways of firing and all the glazes and to make them themselves. “In addition, at that time, in the late 70s, ceramics no longer necessarily needed to have a function. We didn’t make any functional ceramics but only sculptural pieces,” Riccardo emphasises. After being awarded her Bachelor of Fine Arts, she set up a studio in New York, mainly making functional pots, however. But this was not enough for her and she went on to study at Louisiana State University where she received an M.A. in ceramics.
In 1985, she returned to New York, working in her own studio, where she worked mainly on sculptural pieces. “But objects you can use,” she laughs. Indeed, even today Riccardo has remained faithful to her ceramic objects that nevertheless permit or hint at a function as bowls or vases.
(Nicole Baronsky-Ottmann) 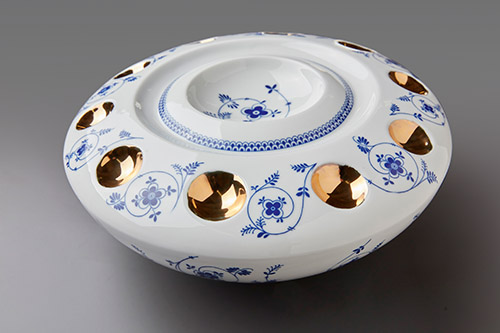 The Australian Ceramics Triennale is Australia’s landmark national ceramics conference, bringing artists, educators, theorists and collectors from around the country together to investigate the field of contemporary ceramic practice. It included satellite events, in particular master classes, hosted by Australia’s finest ceramicists, both before and after the conference. Ampere Mparntwe was hosted by Central Craft in conjunction with The Australian Ceramics Association. The conference hub was located at the Araluen Cultural Precinct, Alice Springs. Alice Springs is the regional hub of Central Australia and the third-largest town in the Northern Territory of Australia with a population of 32,612 people in 2022.

Mparntwe / Alice Springs is home to the central Arrernte people and a vibrant and diverse arts community. It is surrounded by the majestic world heritage listed ranges of Tjoritja National Park, crisscrossed by ancestral stories, home to a vast array of animals, plants and spectacular desert country. The iconic and sacred Australian sandstone monolith Uluru is located 450 km from Alice and is a must-see.
Because of its remote location in the heart of Australia, this conference felt like an immersion learning programme for all participants in the oldest and longest living culture on earth dating back 65,000 years!
(Michaela Kloeckner) 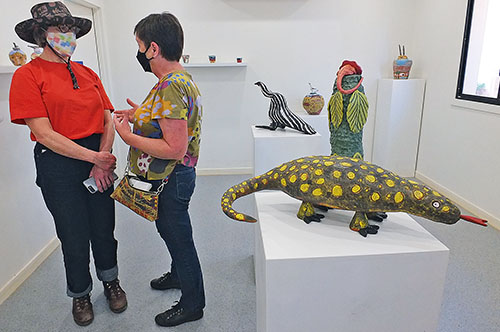 In the idyllic little town of Römhild south of the Thuringian Forest in Germany, the XIIth International Ceramics Symposium under the motto Die Kraft der Kunst (“The Power of Art”) took place in August 2022. Eight artists – four women, four men – joined the technical manager Joachim Lambrecht at Glücksburg Castle to work together for four weeks.

During this time, the power of ceramics to form identity could be sensed in Römhild. The members of the organizing association, the Förderverein Internationales Keramiksymposium Römhild e.V., had prepared everything meticulously and eagerly awaited the arrival of the selected group. You could clearly feel the long ceramic tradition of the place and the importance that this still even today has for many ceramics enthusiasts in and around Römhild. The studio – the freshly and extensively renovated former baroque chapel in the castle grounds – was ready for use with plenty of space, large windows to the castle courtyard, numerous kilns and inviting break areas. Mayor Heiko Bartholomäus invited everyone to the reception in the neighbouring wing of the castle, where the city administration has its prestigious headquarters and where the Museum Schloss Glücksburg is located with its outstanding focus on ceramics. Even before this official start, the artists had taken up their work places, examined the previously ordered clay stocks and had their tools ready. Everyone was ready to go.
(Ruth Heftrig) 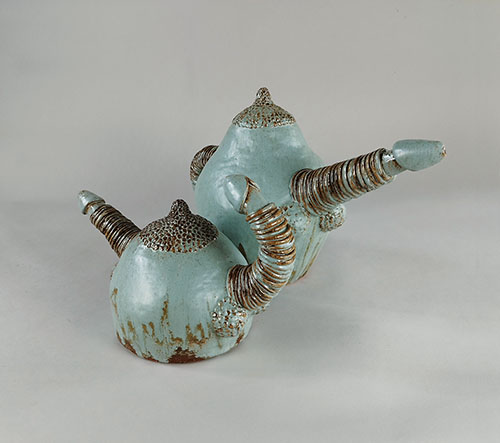 The Danish ceramicist Morten Løbner Espersen is obsessed with glazes, the colours, structures and lustre. He examines the effect curiously as they run across the surfaces of the chosen shapes: the severe cylinder with its vertical walls, the spherical Moon Jar, the elliptical Magma Jar or the lavish Horror Vacui amphora with its vigorous, twisted ornaments.
To me, my work is all about finding the perfect and sublime shape. And about adding seductive and sensual colours to it, he explains.
Morten Løbner Espersen continually performs experiments to release the potentiality of the material and loves the excitement of opening the kiln because, as he puts it: the potential piece holds so many possibilities of unseen beauty. The surfaces and curves of the vessels influence the progress and potentials of the glazes and contribute to the constant interplay between the plain and the complex. With layer upon layer and exposed to several firings, the glazes unfold an endless abundance of colour effects and tactile expressions.
CLAY Museum of Ceramic Art Denmark, Kongebrowej 42 5500 Middelfart 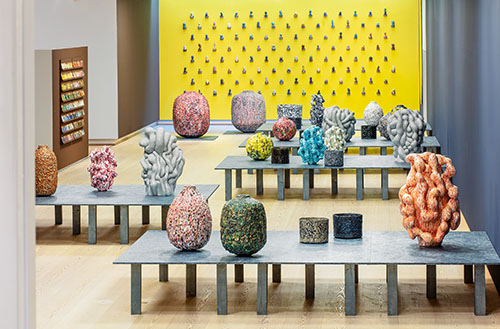 The photos show views of the exhibition

Liu, Xi    (China)
After Nirvana, the Silver Prize winner of the 2016 Taiwan Ceramics Biennale featuring a group of knots, Liu Xi (b. 1986) made Mama, a series presenting worn wood-like washboards with waves, wrinkles and beads of water. Having explored for years the possibilities of clay in converting materials, the artist linked the works to female experiences.

Naoki Nomura    (Japan)
Nomura (b. 1978) lives in a mountain where wild animals roam and various plants grow freely. In the embrace of nature, Nomura transformed his imaginary animals and plants into rich fantastic shapes, or merged the human and the natural, as shown in the man with a body hung in the clouds or the child with a head buried in the hillside. 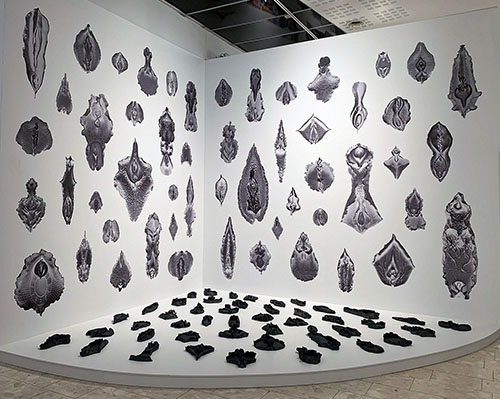 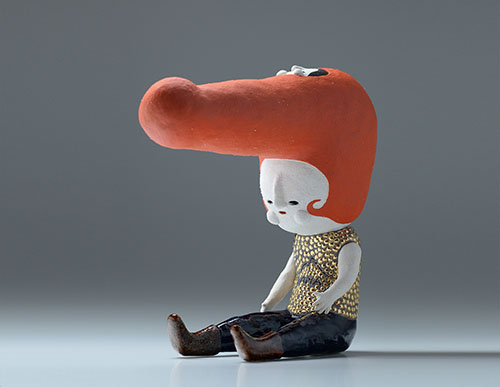 In Studio with Stela Ivanova

First of all: congratulations on the 2nd prize in the International Ceramics competition of Castellamonte, Stela!

Thank you, Evelyne! I’m proud because this award is recognition on the international level where I can join in with some good artists. At the opening of the exhibition, I was able to observe how visitors interacted with my piece, which made me very pleased.

Let’s start with your biography: You are both Bulgarian and Portuguese. Would you tell us about your life so far and how you came to be a ceramic artist?

I was born and raised in Bulgaria. My grandfather was a shepherd, he carved figures in wood and drew very well. My grandmother spun the wool from our sheep, knitted and wove textiles on her loom. My mother ran a serigraphy workshop, where I spent whole afternoons watching what she did. At primary school, one day, I made such a good clay figure that the teacher took it to an exhibition. Later in Lisbon as a student at the Faculty of Architecture of the Technical University, I made a clay architectural model and felt the fantastic plasticity of the medium. 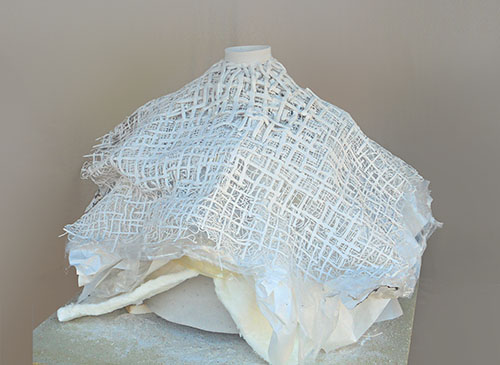