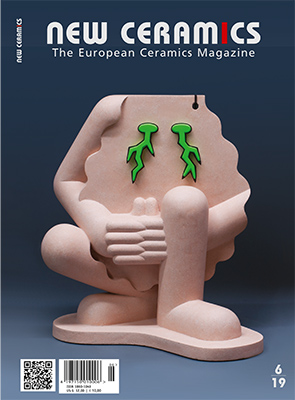 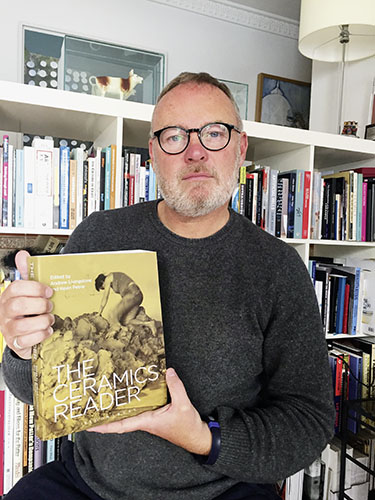 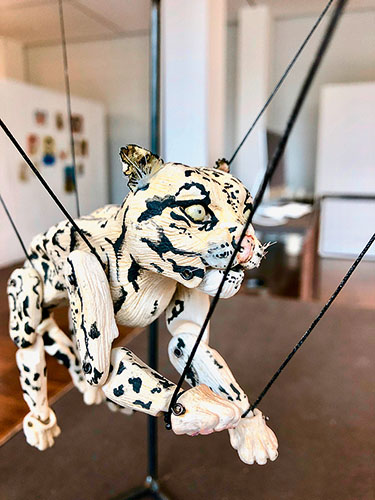 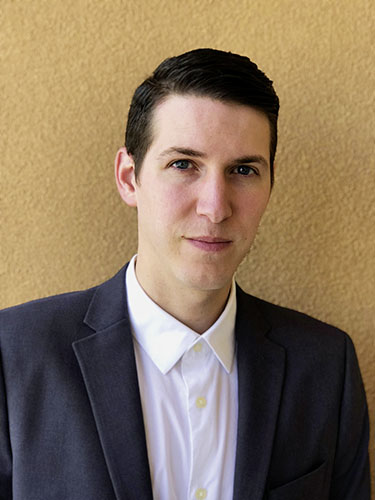 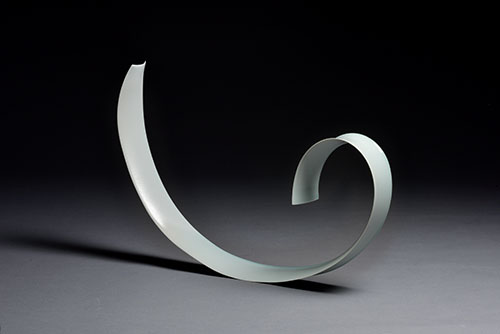 Dates and Exhibitions from Amsterdam to Winzer 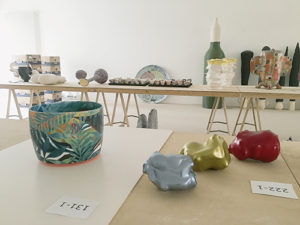 Andrew and I have cooperated in juries and presentations and can recall other occasions we have met and worked together over the last 15 years – so instead of a classic interview Andrew Livingstone gave us a wonderful introduction about his “journey” in ceramics, art and writing. He says it is a pleasure to engage with you, as readers, in dialogue.

Andrew Livingstone: My first introduction to clay was at sixth-form college (age 16-18). Prior to that age my experience of art within school had not included clay, but was more focused on painting and sculpture. On arrival at sixth-form college I was able to study A-levels in art, design and pottery, – this was my first experience with the material clay. Whilst I was more experimental in approach within art and design subjects, the work I created within the subject of pottery was focussed on process and technical investi-gation, crea-ting slab, coiled and thrown vessels/forms – at that point my inspiration and guidance was taken from Ceramic Review and the tutor – my knowledge of ceramics was very limited. My experience and exposure to a wider ceramic discourse was to change when I embarked on a BA Ceramics undergraduate programme at Camberwell school of Art in London.[/rs_section_text_block]

[/rs_promo_box]
[rs_section_text_block heading=”Verity Howard” btn_link_one=”url:%23||” btn_link_two=”url:%23||”]Surreal, Stone Like, Obscured and Encaged: these words were the starting point for Verity Howard’s Sacrificial Stone Series. As you look at Verity’s forms you see familiarity, the surreal, chaos, order, movement and stillness. Memories are evoked and your imagination is ignited. Verity strives to create works that trigger memories, elicit feelings, generate an atmosphere and evoke a sense of place.

Verity grew up in the idyllic countryside of Herefordshire. From a young age she has been interested in collecting objects. When walking through ploughed fields Verity would spend hours looking for shards of pottery nestling amongst the freshly disturbed soil. She loved to imagine the history surrounding these pieces of pottery, the families that had used these now fragmented objects and the mystery surrounding past lives. Verity would also spend much of her time exploring old and abandoned houses. She was fascinated with the sense of mystery, stillness and sadness surrounding these buildings that had once been a home but now only echoed the lives and families that lived there.[/rs_section_text_block]

How did you get started with pottery?

I discovered clay in my late thirties when my children were in school and I returned to college to finish my Art History Degree. I needed an elective and chose ceramics! I immediately fell in love with clay and knew I needed to make pots on a full time basis! And when looking at pottery in books and magazines back then I was immediately drawn to wood fired and salt glazed surfaces.

What type of clay do you use? Do you use more than one? Why?

I use relatively fine and smooth stoneware bodies that fire to cone 10 and that respond well to atmospheric firings and blushing. I find smooth stoneware suitable to the type of functional and useful kitchen wares I make. I enjoy throwing and hand building with these clay bodies and after wood firing and salt glazing, the surfaces of my pots are smooth and comfortable for holding in the hand or for drinking or for eating from. I have enjoyed using some boutique clays from Starworks in North Carolina for my teabowls this past year. These are great wild clays and I will add blacksmith millings into the clay when I wedge it to give the pots a textural look. I enjoy using these clays for my teabowls – as my throwing is a bit looser for these forms and I feel the teabowl form allows me to be a little bit more expressive. The wild clays like Dark Star and Catawba Wild are soft and wonderful for throwing teabowls and wonderful for brushing on slips, swiping my fingers through red, thick porcelain and yellow slips, and incising lines with homemade brushes through the slips. The qualities of the wild clays almost on their own encourage a looser thrown pot – and I like this in my teabowls. [/rs_section_text_block]

[rs_section_text_block heading=”Christiane Toewe” btn_link_one=”url:%23||” btn_link_two=”url:%23||”]Light, lightness and movement are the defining characteristics of Christiane Toewe’s work. Porcelain is her medium of choice. Besides creating individual pieces, Toewe always thinks in larger dimensions and contexts. In spatially related installations, the material porcelain – complemented by the media of air and sound – becomes the vehicle for societal and ethical issues.
But let us begin with light. In 1990, Toewe created a series of steeply rising objects. This was her graduation piece for ceramics in the design department in Höhr-Grenzhausen. She developed this series, called ZIPS, following a journey to China, where she encountered eggshell porcelain. Literally. The lightness, translucency, and then this high, lasting sound from a Chinese porcelain bowl fascinated her immediately. It took a year’s development work before she was able to evolve her first translucent forms with such sculptural refinement. Since then, the theme of translucency has never let her go. Lamps inside the forms emphasise and enhance the increasing and decreasing gradients of opacity and transparency. The light migrates.

After they had met several times on various occasions, most recently at Argillà de Faenza (IT), and had spoken about their shared desire to work together and swap ideas, Evandro Gabrieli, Silvia Granata und Karin-Putsch-Grassi decided to make the long-held idea of a symposium a reality.
Karin Putsch-Grassi – German born and a resident of Tuscany – played host. La Cassina, a recently purchased and restored country-style farmhouse and sawmill from the eighteenth century lies amidst the hills in the Chianti region, surrounded by olive groves, 30 km south of Florence.
The Claycollective Symposium is the first event to take place on the new premises. It is intended as a meeting place where groups of artists are to be given the opportunity of artistic development and exploration. In contrast to other international symposia, which are supported by institutional bodies, this initiative is privately conceived and implemented.
The three ceramists invited a further three artists to participate: Laura Scopa (IT), Helene Kirchmair (AT) and Antonio Taschini (IT).

[rs_section_text_block heading=”Révélations 2019 – PARIS – 4ème biennale internationale des métiers d’art & création ” btn_link_one=”url:%23||” btn_link_two=”url:%23||”]The view of this unmistakable architectural jewel from the Belle Époque so beautifully captured by William Boyd in the above quotation,presented itself to me when I attended the opening ceremony of the fourth international biennale, Révélations, in late May 2019. Romain Juilha, responsible for international projects at Ateliers d’Art de France, had invited me to attend the show in this magnificent Baroque-influenced Neoclassicist building, “la Gloire de l‘Art français”. When you enter “la nef”, as “nave” is known, beneath the arching industrial iron and glass construction erected for the World Exhibition in 1900, you are immediately overwhelmed. Since the World Exhibition, in a vast space totalling 5,000 m2 there are regular top-ranking trade fairs, prestigious exhibitions and opulent fashion events, not to mention concerts and guest circus performances.
And now since 2013, there is also Révélations. Just a word on the origins of this biennale: contemporary craft has always been well represented in trade shows in France. The Ateliers d’Art de France, ambassador of countless top crafts studios in France, lacked a prestigious salon in which to present high-end craft work to the general public. This is why Ateliers d’Art de France launched the biennale Révélations in 2013, immediately causing a national and international sensation. Just “being there”, exhibiting, giving a talk or simply enjoying the sales booths as a visitor is a must among art lovers.

[rs_section_text_block heading=”All that´s Gold Does Glitter – An Exhibition of Glamorous Ceramics” btn_link_one=”url:%23||” btn_link_two=”url:%23||”]The global ceramics trade has had a long history in China’s Pearl River Delta with Guangzhou, Hong Kong, and Macao providing the bases of operation for a flourishing Maritime Silk Road. So, it was with eager anticipation that I headed to Macao this past June to attend the opening of All That’s Gold Does Glitter: An Exhibition of Glamorous Ceramics. Installed in four integrated resorts, including The Venetian Macao, The Parisian Macao, Sands Macao and Four Seasons Hotel Macao, as well as at the Macao Museum of Art, the exhibition is on view from June 8th to October 9th of this year.
Coordinated for the Art Macao: International Art Exhibition and featuring ‘Gold’ as its theme, this invitational group exhibition showcases over ninety pieces created by twenty-seven contemporary ceramic artists from thirteen countries and regions, and is a featured part of Art Macao 2019, a six-month-long international arts and culture mega event (www.artmacao.mo/2019/en/) organized under the patronage of the Government of the Macao Special Administrative Region (S.A.R.) to celebrate the 20th anniversary of its establishment.

[rs_section_text_block heading=”Artist Journal: Joshua R. Clark and Hiroaki Taimei MORINO” btn_link_one=”url:%23||” btn_link_two=”url:%23||”]Joshua R. Clark      (U.S.A.)
Joshua R. Clark was born in 1989 in Ohio, USA. Using the familiar things seen everywhere and readily available in daily life or reflections of consciousness, the artist collects and assembles seemingly unrelated, individual objects. Montages of scenes and stories begin to unravel.
“A collection of associative experiences that I feel has the potential to communicate something telling about our collective human psychology, specifically as it relates to our desire for aesthetics experiences. There is a gap between how the world is presented to us, and how we then perceive it.”

Hiroaki Taimei MORINO   (Japan)
Born in 1934 into a family of ceramicists in Kyoto, Morino is one of the pivotal figures of the second-generation contemporary Japanese ceramicists. He was invited to teach in the university in USA in the 1960s. His sensitive grasp of the relation between color and shape, his ingenious arrangement of light and dark colors, has turned his works into an epitome of the profundity of Japanese aesthetics and its tradition of architecture and craft.

[rs_section_text_block heading=”In Studio with Satoshi Kino” btn_link_one=”url:%23||” btn_link_two=”url:%23||”]Satoshi, normally I start my interview by asking my guests about their ceramic background. What is yours?

While I was 15 years old for selecting the right high school education, I decided to enter the oldest art and craft high school in Kyoto. I chose ceramics as my major because I am more interested in working on three-dimensional than that on 2-D arts. From there, I started my life in ceramic arts. In order to learn not only techniques of craft but also creative thinking of art, I continued to major in ceramics for my bachelor and master degrees. I was very lucky to work as a ceramic artist right after I graduated from school and build my first studio in Kyoto. Right now, I have my second studio in Taiwan.

Your waves or ribbons have their own aesthetic and sensibility. What pictures have you in mind while working on a ribbon? What inspires you?

I personally enjoy the view of nature deeply, such as the vanishing line of the horizon, the clear and endless sky or the untouchable atmosphere of fog or cold air. The natural element always calms but excites my heart. However, all the beauty of natural elements is impermanent. I enjoy to see those art works which concentrate on social issues. And I watch news every day and am concerned by politics or philosophical problems like everyone else. However, I sometimes just feel tired of all the arguments and wish to seek the purest beauty that does not need language to explain. I wish to create beautiful work which everyone can enjoy and be comforted by no matter we are good or bad person. I’d like to be that kind of artist.