In the PROFILES section: Eight ceramic artists from Italy, Germany, UK, Korea. Coverage of EXHIBITIONS and EVENTS in France, Germany, UK, Switzerland, Cuba, Latvia. In the section ARTIST JOURNAL, we present Yasunaga  Masaomi and Pattie Beerens. And we also have interviews with artists IN STUDIO as well as listings of Dates, Courses, Seminars and Markets. 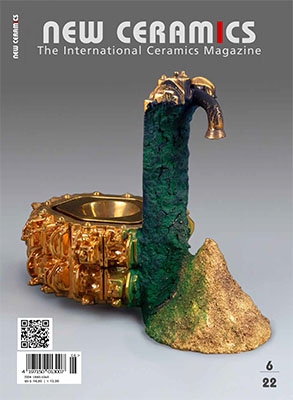 Christin Müller’s sculptures often remain static and at the same time seem to burst with expressiveness. Their inner structure, including broken edges and cavities, is revealed to the observing eye. The gaze can penetrate into the load-bearing structure, into dark cavities in the midst of cracked contours. Humankind: a fragment.
It is very fortunate to be able to make art in these times, says the artist, to always be able to withdraw into the studio, to engage in dialogue with new and older works, not having to listen to news while working and yet to remain open to the world. In a protected atmosphere, Müller asks her own questions in her work: How far can I go before something becomes unstable? When are the boundaries of fragility crossed? Are we stronger than we think?
The artist reports that the prototype for her current work was originally a musical-abstract staircase. While she was still studying, she experimented with materials and forms with them, adopting methods derived from tiled-stove construction. 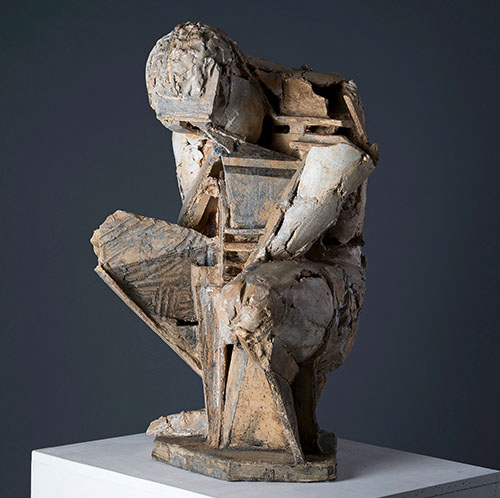 Looking up at the sky on a clear night, we see white dots on a dark surface. What is perceived as background is in fact an infinite void. Walking on the moon has not changed the notion in people’s heads, that the stars are simply pinned on a vast canvas. Such reversal of the facts, or rather their true presence, is the focus of the ceramic artist Zoe Preece. A person of serene energy and of the elegant posture of a dancer. Her house in Cardiff, where she lives, is now emptier since her two children have grown out of it. It has served her and her partner, a photographer, well during Covid restrictions.
Material Presence, the work made in 2018, is now part of the permanent collection in the National Museum of Wales. It is exhibited alongside paintings of Paul Cézanne and Pablo Picasso until April 2023.
In the midst of an otherwise empty room with high ceilings stands a wooden table of quite large dimensions. The surface looks like there has been a conserving veil stretched over it after a precedent meal. A painting of The Last Supper comes to mind, with the visitor of the exhibition that may take her place in the honourable committee. For instance, dirty dishes are seen as a nuisance that disturbs. 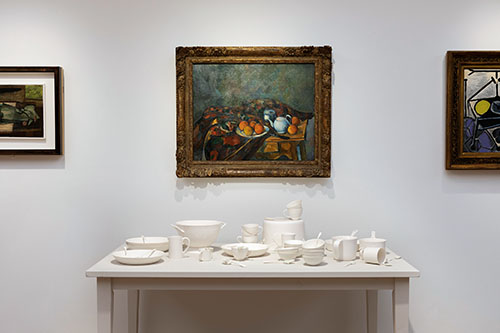 On meeting Ben Fosker and seeing his work for the first time I found it a challenge to align the personality of the person with his creations, so I had to set about understanding, defining and disentangling my first impressions. I found him ebullient, gregarious and larger than life. He presents himself as a bold affable figure and he exudes a confidence amassed from a mixed bag of worldly challenges and experiences collected over many years. He grew up in a small coastal maritime village in Essex in the UK in surroundings that he now recalls as “magical”. The son of a cowman, money was not in abundance in his family and an early desire to follow a creative education and attend Art School was aborted by his mother with the result that he went to sea on a coaster at the age of 16 and pursued a maritime career for many years.
At 19 years old he sailed across the Atlantic in a small yacht and his experiences would go on to include becoming a Buddhist monk on a remote Scottish island, taking a pilgrimage to India and Tibet, rigging a ship that would feature in a Polanski movie and having more than one attempt to pursue a formal education within an art school environment. His dalliance with the art education establishment was never seen to a full conclusion however as he became disillusioned by what he describes as a “pseudo academic approach to creativity”. 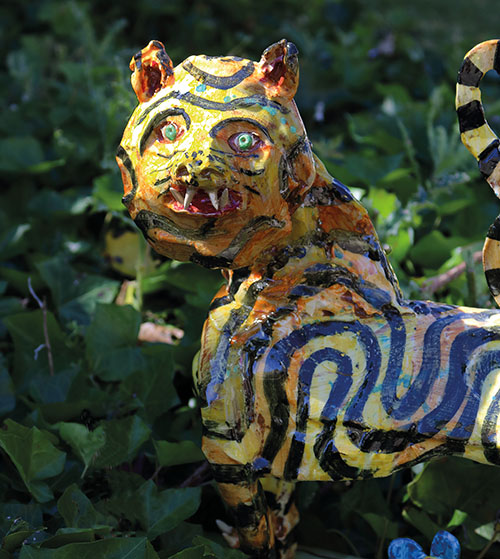 The 52nd edition of the International Art Ceramics Competition began on 19 May 2001, and the Faenza Prize was awarded to Ana Cecilia Hillar with the citation, “This work of powerful emotive impact displays the artist’s great skill at combining imagination and traditional local techniques with a wholly contemporary language”. The emphasis that the jury placed on “local techniques” acquires particular significance in consideration of the cultural and political context of that time: about two months later, on 20 July 2001, a young man would be assassinated during demonstrations linked to the G8 conference in Genoa (and just two nights later the tragic episode at the Diaz School would lead to over 63 activists ending up in hospital).
Tensions were running high at that time, so high that the nearby Albisola Biennial for Ceramic Art, which had opened on 21 July 2001, was described by Tiziana Casapietra, its founder and curator, thus: “During G8 we organised the first edition, and we called it the positive side of globalisation because while 40 km away a massacre was going on, we were implementing a project in the opposite direction, bringing people together through art.” 1
So, when Ana Cecilia Hillar won the Faenza Prize in 2001, there was a radical rift between an international dimension in terms of the acceptance of globality, and the defence of local culture, with locations where it is still possible to foster human interactions and develop ecologically sustainable concepts. 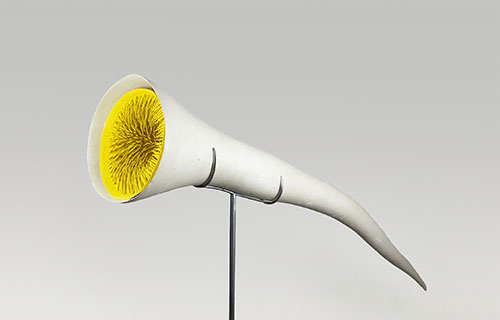 The KERAMION Foundation Ceramics Prize has been in existence as a young talent award in the form of a competition since 1972. It is aimed at young artists not born before 1987 who work ceramically in Germany. Applications in the field of ceramic art were possible as vessels, sculptures, reliefs or pictures, as serial work or architecturally referenced ceramics as well as installations. The prizes worth 2,500 Euro each were presented on 20 October 2022 on the occasion of the fiftieth anniversary and were sponsored by the cultural and environmental foundation of the bank, the Kreissparkasse Köln, Rheinenergie AG and the municipality of Frechen. Additionally, a special prize of 2,000 Euro was awarded by Regine and Heiko Hünemeyer.
On two levels, the seventeen finalists presented fascinating, highly varied contemporary interpretations of the artistic use of clay as a medium. Applications were received from a wide range of higher education institutions, from artists with various career paths and biographies from a generation of younger ceramic artists. They all share the intensity of their personal working methods under the premise that aesthetics and content, skills and professionalism are (still) fundamentals that stimulate perception, high regard and appreciation in the viewer. 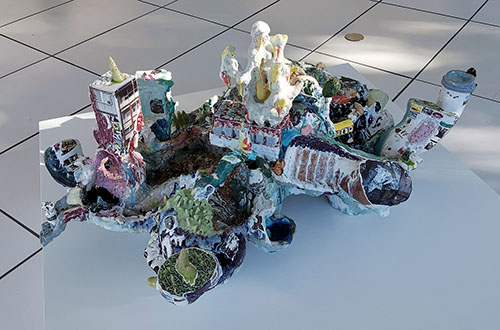 In 2022, the INTERNATIONAL CERAMICS COMPETITION in CAROUGE had the beautiful title: Bling-Bling – as always, an exquisite presentation. The city of Carouge has been organizing this biennial since 1987, with a one-year postponement in 2022, now timed to coincide with the 50th Congress of the AIC/IAC (International Academy of Ceramics) and the Parcours Céramique Carougeois. Both events had chosen the theme from the point of view of alchemy. Bling-Bling as a term goes back to rap, the music of the 1990s. Then, gold chains and bracelets worn with pride were seen as references demonstrating emancipation and originality, later as more aggressive displays of exaggerated ego, position of power and sheer financial superiority.
Ceramics and alchemy have always been close together, both technically and metaphorically: turning base matter into gold, fire as a purifying force – “Gold all doth lure, Gold doth secure …” (Goethe, Faust I) – there were no limits to the imagination of the participants, gates were deliberately wide open for gloss and glitter of all kinds, for humorous ceramics, in quotations but also quite critical presentations. 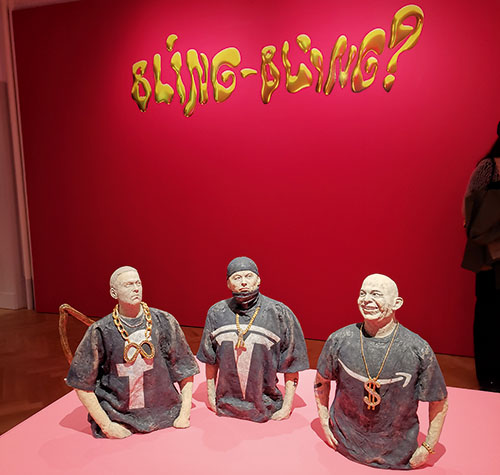 The Academy celebrated its 70th anniversary and the 50th congress from 12 – 16 September 2022 at the headquarters in Geneva, French Switzerland, the cradle of the organization. After Taiwan, this was the first face-to-face AIC meeting for many. The last congress in Latvia, in Posio 2 years ago, was inevitably an online congress because of Covid19 and as such – despite the well-attended chat rooms – somewhat impersonal via ZOOM. The motto for 2022 was Melting Pot: From the alchemist’s crucible to the cultural crucible – also a symbol of the international dimension of a city like Geneva, where diverse cultural and political influences merge. 374 participants from 42 countries attended, 332 in person, 42 via recorded congress.
The 2022 congress was supported by swissceramics – not an easy task, for which a big thank you is due from all sides! More than 30 exhibitions in national and private museums, art galleries and historical or contemporary institutions were part of the event. The two presentations in Nyon and Neuchâtel were outstanding! Works by the AIC membership were exhibited at the Ariana Museum. The new artists admitted 2022 were introduced with their works in an elegant virtual presentation. An international exhibition was also set up in the UN quarter. The title BLING BLING?, which made the parallel Biennale in Carouge a highlight, was also themed with the “Melting Pot”. The quality of the artworks presented there is covered separately: see page 34/35 of this NK/NC.
The 5-day programme of the congress consisted of lectures, discussions, the obligatory general assembly and visits to national and international exhibitions. 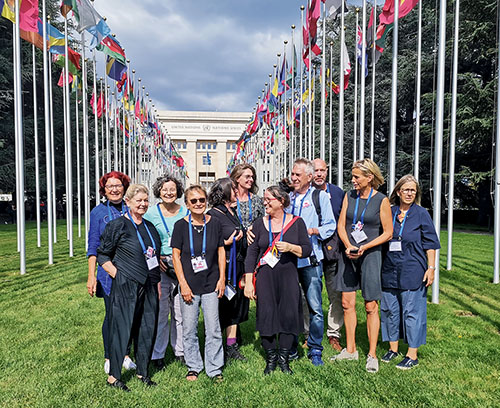 The “German-speaking groupe” outside the UN building

Pattie Beerens   (Australia)
Standing on the ground, breathing the air, and living by water and food supplied by the earth, we are nevertheless in a technological age of rapid exchanges of virtual values. Pattie Beerens (born 1962) focuses on the relationship between humans and the earth and interpersonal interaction. She collects clay and combines it with cotton threads and other natural materials, colours the works with the colours from plants and foods, which change over time, without using any glaze, and returns them to the earth after exhibitions to continue the cycle of nature.

Yasunaga  Masaomi   (Japan)
Lives and works in Iga-Shi, Mie Prefecture, Japan. Graduated from the Department of Environmental Design of Osaka Sangyo University, Yasunaga Masaomi (born 1982) studied ceramics under the Japanese ceramicist Hoshino Satoru.
Yasunaga works with a combination of feldspar, lime and other materials, examining the effects of using natural materials. Due to the glaze he used as his primary materials, his works melted and collapsed during the firing process, but the artist used other supporting materials to preserve their basic shapes. 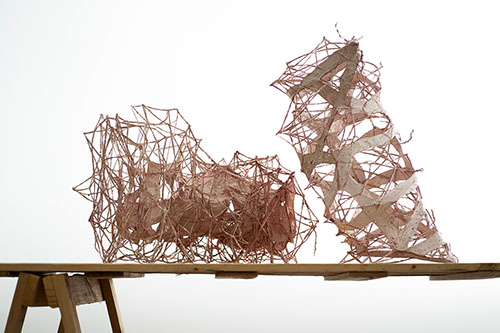 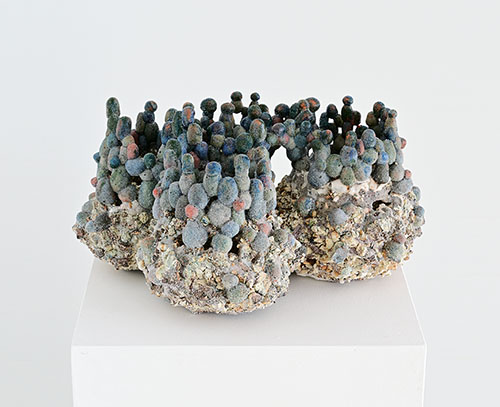 In Studio with Melanie Ferguson

Would you tell us about your very interesting biography and how you came to work with clay?

Growing up on the Oregon coast, the beach was central to my focus. A beach walker who became friend was a noted coastal potter that welcomed me to watch and listen as she sculpted with clay, sharing salty analogies such as, “pinch the clay like a crab”, or, “cut the clay like a whale’s tail slices through the water in breach”, while moving her body to the cadence of the story as a gesture to the cut. During that period, my passion was map illustration. Clay dug from a beach hillside added a topographical dimension to my pen and ink illustrations that were influenced by the progression of similar ocean-related analogies for each mountain, river, or valley added to the topography. 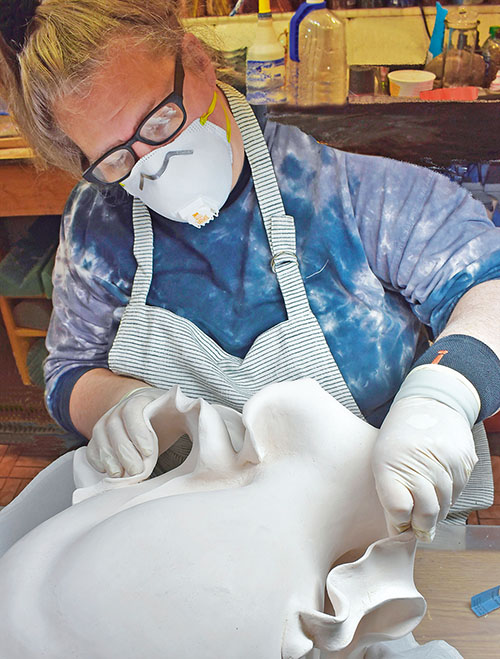