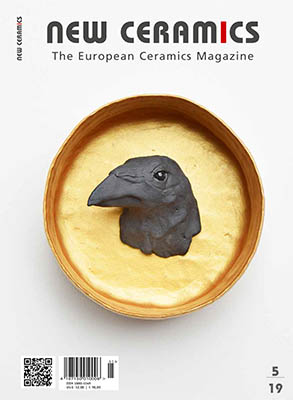 The new expo with your work at the Museum Ariana MUR / MURS started with a great opening in May. You have set up in an amazingly big and beautiful brick installation this museums’ park – what was your idea?
With this exhibition, it is, for me as for the Ariana Museum, the longest exposure montage! To set up 5 outdoor installations in the Museum’s park, to which are added the spaces inside the Museum, it took more than 3 months, which took place in a spirit of very enthusiastic collaboration, from both the Museum and partner institutions.
For the largest installation in the park, The Flight of the Fly 2, it was thought according to the structure of this space in the park: a gentle slope, surrounded by tall old trees, leading from the Museum to the UN. I knew where I wanted to start, in the upper part of the field, and where I wanted to end, below. Between the two, like a free gesture.

Here is what I wrote in terms of intentions:

“undulating and snaking, like a rapid pencil stroke on a sheet of paper, a few seconds during which the flexibility of the gesture is captured. It is the image of water when it, after falling, rolling, and cascading, it finally lets itself wander, lazily, in unhindered. This is the stealth of the snake in long grass.
In a chaotically moving world, it is the luxury of a gift of time, in a calm landscape, an invitation to ‘reverie’. The gentle slope on the Ariana Museum’s south side lends itself to this gesture: the shape’s flexibility means that nothing in this project is rectilinear, horizontal or vertical.”

To realize this work, it took a month, with the collaboration of the technical services of the City for the 90 metres of foundations, and the first row of bricks, which I absolutely needed to be perfectly levelled. The follow-up took place with the participation of young people from an institution called ABX, which gives a new chance to young people who have left all training systems. The meeting with these young people, as with others who collaborated on the other 4 facilities, is part of an important dimension for me, that of exchanges and contributions that I believe have been fruitful for everyone, within the framework of a practice. 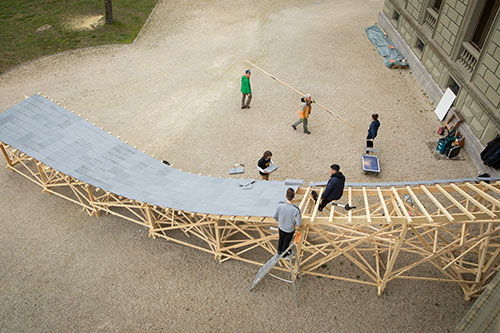 Alison Britton has in her ceramic work persistently restrained her palette, and her recurrent recombining of just a few different materials and visual elements has become much like a signature. Her pieces are often poised in between the functional and the playful – a spout mounted here and a handle there – and hinting at stories of use and domesticity. Mostly they are defying categorization, like things still not tamed. When it comes to the words involved Britton prefers the plainer words “jar” or “pot”. The term vessel, she complains, has become “too poeticized”.
A large part of her practice has been dealing with words and writings. And between language and making she sees not a gap, rather the opposite. Her way of bridging what is deemed by many to be on one hand theoretical versus practical, stems from her childhood and her father who was “a progressive educationalist”:

“He encouraged me to write, and to make things. So between these two there’s always been a logical connection for me. To make creates a language in the same way as reading/writing does”.
Her father’s research on how children acquire language in the domestic setting did at some point involve both Britton and her sister, and she can now recall being both professionally and genuinely encouraged to talk as a child, and she sees how her experience of being listened to very early on in life also must have positively affected the development of personality in that phase of her life. 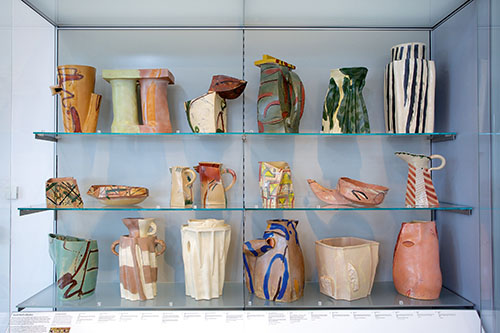 Marjan de Voogd was born in Davos (Switzerland, 1957). Marjan spent the first years of her life there. She still has fond memories of this time. After three years, the family moved to the Netherlands. Marjan grew up in Amsterdam.
Marjan’s parents were both born in Indonesia. Both her grandfathers were stationed there, one as a forestry engineer and the other as a missionary for the Lutheran congregation on the island of Nias (the Mentawei islands). Marjan’s grandparents also owned several Niassian figurines and artefacts. Part of this collection is now included in museums in the Netherlands. When Marjan stayed with her grandparents, she and her brother played among these artefacts, imagining themselves in the times of Genghis Khan. The family from her father’s side lived for a longer period in Indonesia. They were interned in a Japanese prison camp. Luckily they all survived it. Of course, this led to intense stories being told afterwards, but the stories were also colourful about their lives before and after the war. This made Marjan aware of different religions and customs already at a young age. The impact of other cultures would influence her in her work in later years, and especially the influence of Oriental culture would become a source of inspiration. 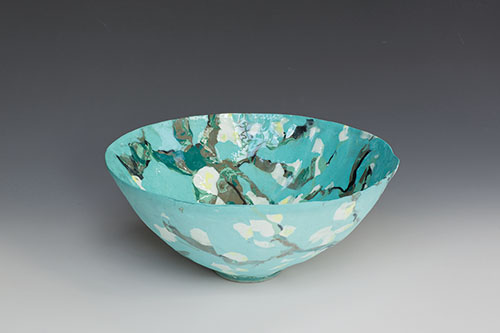 I am always on the lookout for quality work in sculptural ceramics for the SUMMER EXHIBITION at GALERIE KLOSTERFORMAT. For some time I have been in contact with Almuth Lohmann-Zell, who was born in Rostock. As so often, things have come full circle: parents sing in the same choir and Almuth is friends with ceramist Judith Runge, whom we have represented over a long period at the gallery.
Both live in Halle an der Saale, often cooperate on art projects and work very differently with clay as their medium.
Almuth found a connection with sculpture while she was studying ceramics on the sculpture course at Burg Giebichenstein University of Art and Design in Halle. The subject of her degree project were abstractly formed, very impressive portrait heads. Right up to today, they have not let her go.
Parallel to this, designing medals is a further important area in her work. Because of circumstances in her studio, she had to take refuge with colleagues and friends, who in the winter months were working on medals. It fascinated her and reinforced her curiosity, so she looked for her own expressive approach. 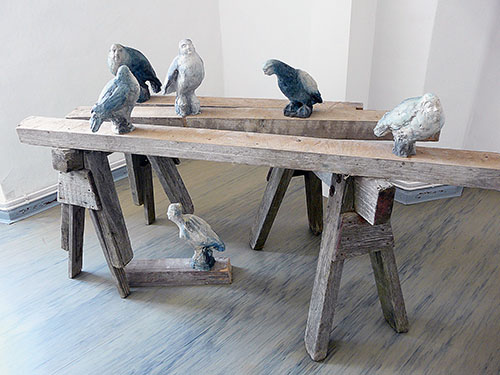 At the Bangkok Arts and Culture Centre, Bai-cha Pongcheen spoke with
Wasinburee Supanichvoraparch about his latest body of works: THE KOBALT SERIES

You are one of Thailand’s most visible and prolific ceramic artists. As a person you appear so calm and composed, but THE KOBALT SERIES reflects your apparently boundless creativity. What brought this project to life?

The KOBALT SERIES is a group of some 60 one-off objects produced in 2016 and early 2017. It is the result of having spent many years experimenting with colour oxides, glazing and firing techniques. Back in Germany, I used mostly earth tones and minimalistic colours. At this time I could never identify myself with vibrant colours. In the late 1990s, a colour expert explained that a current “trend” was to return to natural colours as people feel it gets them back in touch with nature. Not being a fan of “trends” I decided to revolt against this drift. The vibrant blue of cobalt is in my eyes a colour charged with and also able to create powerful emotions. 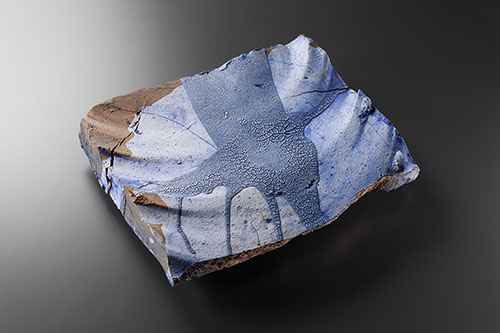 The Westerwald Prize was initiated in 1973 to present outstanding work in ceramics within the framework of a competition and an exhibition. Furthermore, the intention was to promote the dialogue between ceramics and art in the region and to foster cultural exchange in Europe.
The desired dialogue between ceramics and art in particular has been increasingly realised in recent years. Artists without ceramic training or those who work in various genres applied to enter the 14th Westerwald Prize competition too. The boundary lines between the hitherto clearly defined categories of the prize such as design, sculpture or vessel have also become fluid. As a consequence of this new thinking with regard to ceramic material in fine art and the dissolution of categories, the Westerwald Administrative Region decided to redefine the categories for the prizes. The previously separate areas of Design & Series, Vessel, Form & Decor, and Sculpture & Installation are now subsumed under “Free Ceramics”. 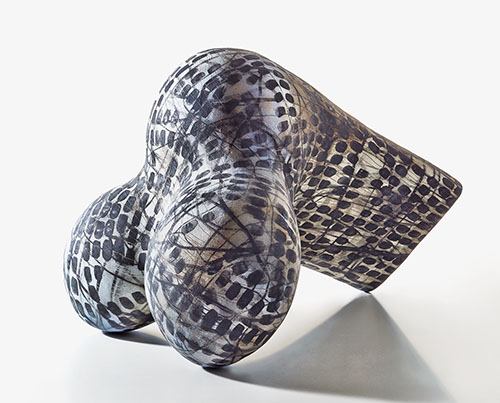 We are in Icheon! After a flight time of 11 hours and 7 hours of time difference, we arrived in Korea’s most famous metropolis for ceramics. Since 2010, the city is part of the UNESCO list of special creative cities. With this accolade, the regions’ pottery was simultaneously recognized as protected world heritage for humanity. Centuries-old traditions of wood fired kilns await us. From this place, Korean knowledge and skills spread to China and Japan until they finally arrived in Europe and America.
First, however, a privately organized taxi brings us to Ye’s Park, a newly founded artists’ place, primarily intended for ceramists working with clay. Here, about 60 km southeast of Seoul, the largest ceramics association together with the cities of Icheon and Yioju acquired a beautiful piece of land some years ago, which lies nestled between rice fields and rolling hills. Now they pass the land on favourable terms to ceramists who want to settle here with house and workshop. Artists from other faculties are also welcome although they pay a little more for the plots. However, this does not stop them from coming in large numbers. 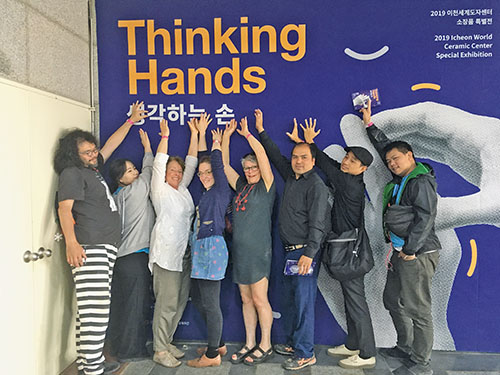 Watarai Yasuhiro (Japan)
Watarai Yasuhiro was born in Gifu Prefecture, Japan, in 1981, and received an M.A. from the Graduate Institute of Osaka University of Fine Art. He is an art major with craftsmanship. He works with glass, and creates ceramic works with the concepts and techniques of glass. His glass and ceramic works are mostly vessels based on the Tiffany technique. His glass works, rich with subtle geometric lines, display simple forms and visual tension. Seemingly ordered lines interweave and vary under glass, whose crystal transparency projects a wealth of changeable light, reminding one of a church sanctuary.

Bodil Manz (Denmark)
Bodil was born in Copenhagen, Denmark, in 1943. Her parchment-like porcelain is not only thin and translucent, the stripes and blocks of colours on the inside and outside of the vessels are variously arranged. She calls these sculptures, assembled from different plaster moulds representing different stages of life, “sampling”. She has been challenging and innovating herself with hand-crafted paper, plaster painting, sand casts and other new forms of porcelain. Bodil Manz is one of the eternal role models in the contemporary ceramic world. 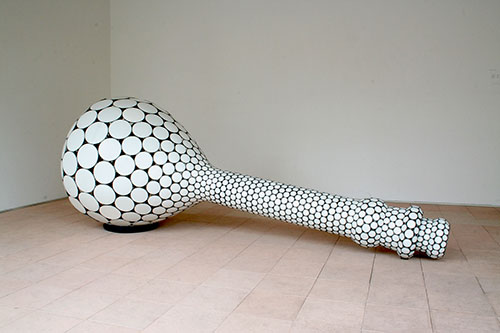 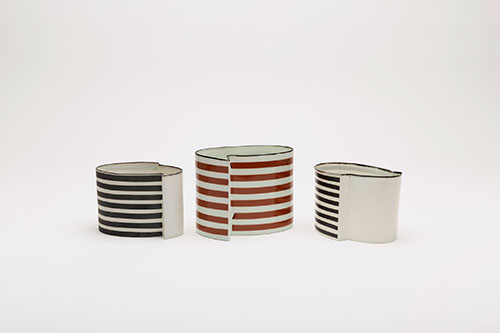 In Studio with Johanna Beil

Johanna, let me begin with the video on your website. You can be seen strolling around a market, approaching a stallholder and asking him if you can take his photo because he has got such a jolly face. That is refreshingly straightforward and brave!

Yes – I have to admit that I definitely have to force myself. I only do it when I am really itching to. But usually, with a bit of charm you can get people to agree. Apart from that, you can collect interesting faces anywhere, even without speaking to the people directly. Nowadays you can take a photo with your mobile quickly and unobtrusively. It is often only about a special detail, an impressive nose, a receding chin, a particular posture. The photo is only a reminder and as source material. Usually, the individual head or figure develops in its own way as I work. 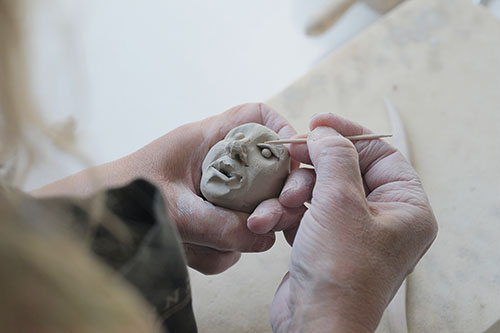